It is with great excitement that we recently received our first ever toy for the purposes of review. We’ve reviewed all sorts of lovely things, but this is the first time we’ve received a good old-fashioned toy, and by a well-known brand too.

My youngest spotted the brightly coloured box from across the room, just as soon as I removed it from the outer packaging. “Racecar! Racecar!” he shouted in excitement. “Open!” The set is meant for children aged 3+ and my youngest will not be 3 for another 2 months, but I thought he’d be pretty safe to have a go with the toy. My 5 year old was interested too, even though he’s not quite the mini petrolhead that my 2yo is. 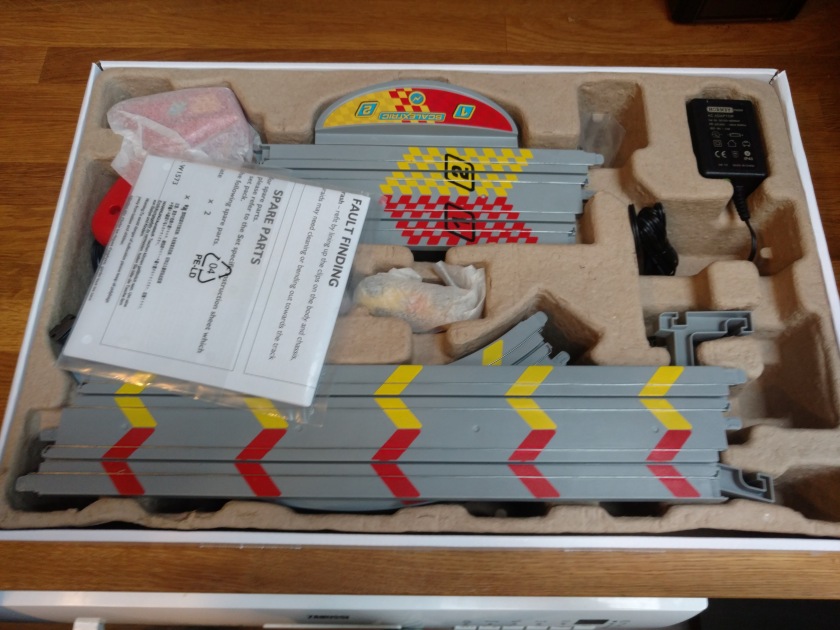 The track seemed pretty sturdy and straightforward to put together, but I did have to check the instructions and it took me a few minutes to figure it out. My kids tried to help put it together, but I think it would be easy for them to break the connections if they were left to do it unattended.

You do need to plug it into the mains and there a a few cables to contend with, but my kids quickly learned how to keep these out of their way.

The biggest challenge with Scalextric is for kids to learn that they can’t go full pelt on the controller button. You have to press it gently so that the car doesn’t fly off the track when it goes round the bends. My First Scalextric has controllers that allow you to turn down the speed of the controllers while your kids get a hang of that. This feature is common to the entire Micro Scalextric range, and all of the Micro Scalextric cars and tracks work together so you can build massive tracks if you have more than one set.

My youngest absolutely loved the track (and so did his daddy, seen lurking in the background above). I asked him what he liked best about it and he said “cars go round and round”. I was actually amazed at how long he was happy to make the car go round and round. Time passed and he was in need of a nap, so he just played lying down. 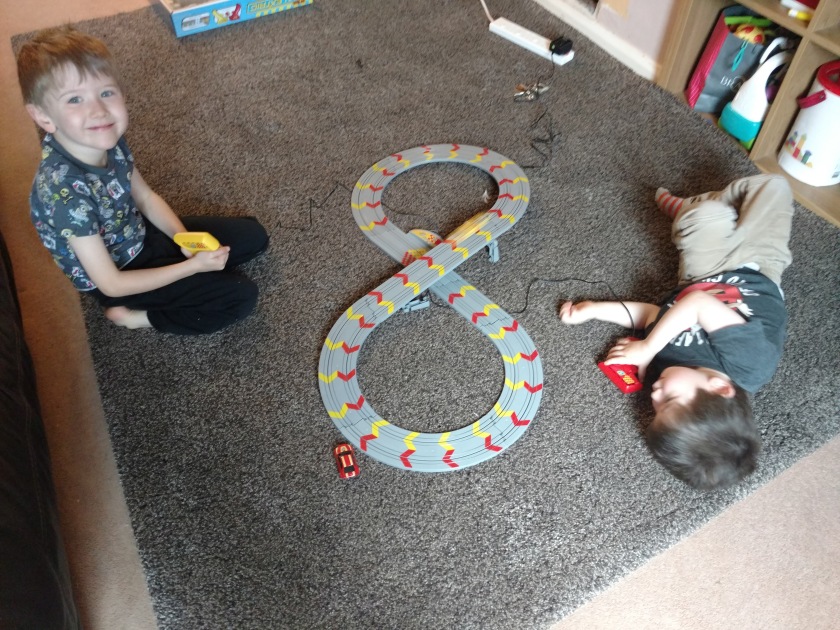 My eldest loved it too. He said he likes it because “It makes a sound like a train”, which is a bit random, but hey, it kept him busy. It was a beautiful way for brothers to play together, actually. They played for probably an hour and didn’t fight during any of it. Two tracks, two cars, two controllers = nothing to fight about. Who knew peace was to be found in the hum of a Scalextric track?

The ease of family play was definitely what I liked most about the set. I was also impressed at how it was teaching them both a bit of patience and self-control, because they had to be gentle with the go button and keep replacing the cars when they shot off the track.

All-in-all, I’d recommend My First Scalextric as a great introduction to electric slot cars. At £39.99, the set is a bit cheaper than other Micro Scalextric tracks, so it’s a great one to try out to see whether your child will like it. For more specs and information, please visit the Scalextric website.

I was given this set free of charge in exchange for my honest review.

9 thoughts on “My First Scalextric review”